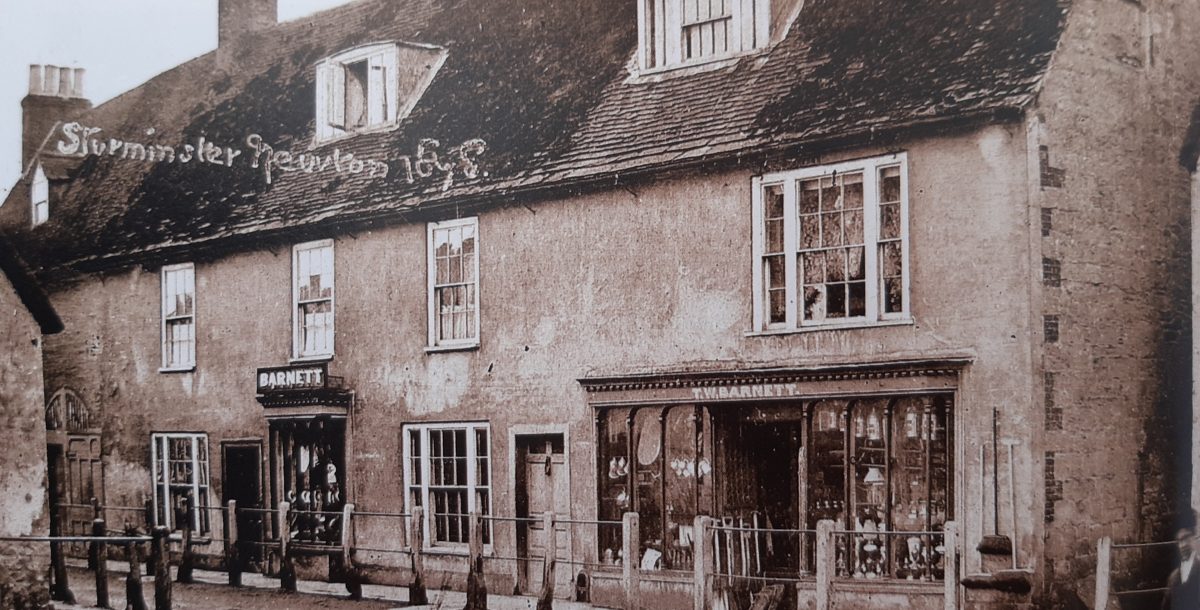 As we have recently recognised 75 years since VE Day I thought it apt to share the brief histories of the war records of two former Sturminster citizens. Both short remembrances serve to illustrate the types of war histories of many of Sturminster’s citizens now sadly a dwindling group and give us all a tangible reminder of their sacrifices on our behalves.

Cecil Crew and Dennis Barnett were two names mentioned in my last piece about Dover’s Entry. Both were involved in actions in world war 2 and were recognised for their bravery. 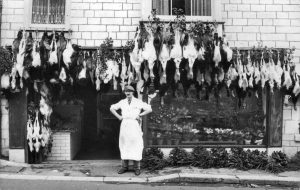 Cecil Crew outside his Sturminster shop

Cecil Crew may still be remembered by some of you for the fishmonger’s shop at Lester House in Bridge Street?  He was born in 1913. Soon after his father, Ronaldo, was it seems involved in action in WW1. We know he arrived in Le Havre with the 333rdRailway Construction Company on 2nd March 1917 returning to Sturminster in November 1918 following several months spent on the hospital ship St David III diagnosed with ‘pyrexia of unknown origin’ (a persistent fever). We also know that he then returned  to his fishmonger business in Bridge Street.

So, just like his father did in the Great War, when the call for men to serve in WW2 came, Cecil Crew enlisted with the Coldstream Guards.  We know he saw action at Monte Cassino, Anzio, Salerno and San Marino and was given a citation for bravery. On 2nd October 1944 at Castiglione del Pepoli, a small municipality situated between Bologna and Florence.

The citation reads: – “On 2nd October 1944, the Battalion, whilst concentrated at Castiglione del Pepoli, came under heavy shell fire.  During the shell fire one of the enemy shells hit a truck filled with 3-inch mortar bombs and other ammunition and set it alight.  In spite of continual shell fire Sergt Crew, without hesitation, seized a fire extinguisher, ran across to the burning truck and tried to put the fire out.  He soon realised that his fire extinguisher was having little effect, that the fire was gradually gaining control, and that as a result a terrible explosion was imminent.  Whereupon Sergt Crew jumped on to the vehicle, tore away the burning canopy with his hands, and, in spite of fumes and exploding small arms, threw overboard the bombs, whose secondary primers were already beginning to explode, into a pool of water.  By so doing, he soon got the fire under control, and then, with the help of further extinguishers, eventually put it out.  Sergt. Crew, by his great devotion to duty and complete disregard to his own personal safety, undoubtedly not only saved the lives of a great number of comrades, but also was responsible for saving that particular vehicle and the possible destruction of many others”.

In recognition of this brave act, 75 years ago, Cecil was awarded the Military Medal a military decoration awarded to personnel of the British Army and to personnel of other Commonwealth countries, below commissioned rank, for bravery in battle on land.It was awarded to “Other Ranks”  for “acts of gallantry and devotion to duty under fire”. 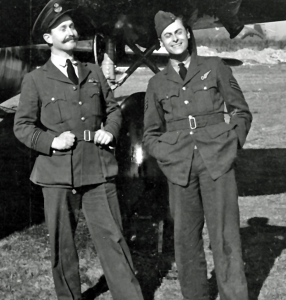 Dennis on the right of the picture

Dennis Chadwick Barnett was born on 30th July 1916 in the Croydon area.

His father, Leonard Albert Barnett (1880-1952), although very much a Sturminster lad, was a cycle mechanic and had moved to Croydon sometime before 1911, where he found love and married Mary Elizabeth Wilds in 1915.  Leonard was the son of Thomas William Barnett (1853-1934), ironmonger, and grandson to Edward William Barnett (1822-1913) a tailor and draper, whose wife, Ann (1824-1872), was the daughter of ironmonger, Thomas Hancock (1799-1876). All this history connects five generations to the former buildings which stood on the site where the Community Chest and Daisy Delbridge are today.  This property, simply known as Barnetts, burned down on 26th October 1972.  An event remembered by many.

However, back to WW2.

Dennis enlisted with the Royal Air Force, as a reservist, on 10th July 1939. From August 1940 until the end of 1941, he undertook 32 sorties with 75 Squadron flying twin-engine Vickers Wellington bombers in attacks on Berlin, Le Havre, Hamburg, Boulogne, Dusseldorf and Ostend to name a few. At this time the Wellington was being used mainly for night bombing raids. Survival of a full tour was limited so our man was extremely brave and can also count himself amongst the lucky few. In April 1941, Sgt D C Barnett, not only became a Pilot Officer, he was also awarded the Distinguished Flying Medal (DFM) The DFM was also for “Other Ranks” and was awarded for “exceptional valour, courage or devotion to duty whilst flying in active operations against the enemy”.

In a move to 150 Squadron, he took part in a further 75 sorties against targets in Northern Europe from bases in the United Kingdom, and in November 1944 he was granted an award of Distinguished Service Order (DSO) awarded for meritorious or distinguished service by officers of the armed forces during wartime, typically in actual combat.

In recognition of gallantry and devotion to duty the D.S.O. has been awarded to Acting Squadron-Leader Dennis Chadwick Barnett, D.F.M.

This officer has a fine operational record and has completed three tours of duty. These have included attacks against many of the enemy’s most important and heavily defended targets in Germany and occupied Europe.  Throughout, this Flight-Commander has displayed the utmost enthusiasm for operational flying and by his fine fighting spirit and splendid example has set a high standard throughout the squadron.  On one occasion in June, 1944, this officer was bomb aimer in an aircraft detailed for an attack on an enemy airfield in Austria. The attack took place in moonlight in the face of considerable enemy opposition.  Squadron-Leader Barnett circled the target area until he could identify his objective by the light of the moon.  He secured an excellent photograph which confirmed the accuracy of his bombing. 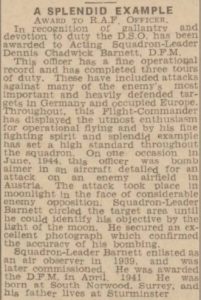 Squadron-Leader Barnett enlisted as an air observer in 1939, and was later commissioned.  He was awarded the D.F.M. in April, 1941.  He was born at South Norwood, Surrey, and his father lives at Sturminster.

The now Squadron-Leader Barnett was discharged on 26 October 1944, and retired from the service in 1946. He married local girl, Janet Penelope Ingram (who worked at Bletchley Park intercepting enemy wireless networks) that same year.

So, both our hero’s returned home following their WW2 exploits to married life and family businesses that were very much a part of pre and post war Sturminster Newton.