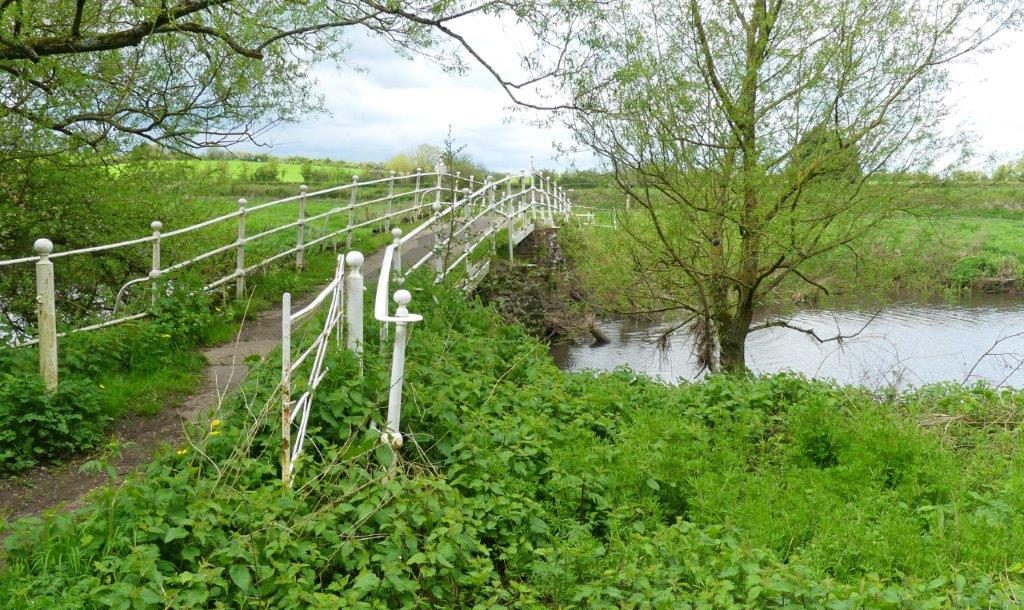 In Thomas Hardy’s novel Tess of the d’Urbervilles the young heroine makes her way through the Sturminster Newton (Stourcastle) town centre in the early hours of a late May morning on a crucial errand her drunken father was incapable of undertaking. Hardy imagined a pathetic tableau passing the Market Cross; Tess with her young half-asleep brother Abraham mounted on their rickety little wagon pulled by Prince, the faithful old horse: ‘only a degree less rickety than the vehicle’. The wagon loaded with beehives was destined for retailers in Dorchester (Casterbridge). It was crucial to the family’s financial survival that they be delivered on time as the swarming season was nearing an end.

Angel Clare, the young man Tess had danced with earlier that day in her home village of Marnhull (Marlott) was now asleep in one of the inns.
Angel was to become Tess’s husband and from Hardy’s description of: ‘the little town of Stourcastle, dumbly somnolent under its thick brown thatch’, we may suppose it was the early eighteenth-century White Hart Inn he had in mind as the young man’s lodgings.

Opposite The White Hart is Sturminster Newton’s Town Museum. 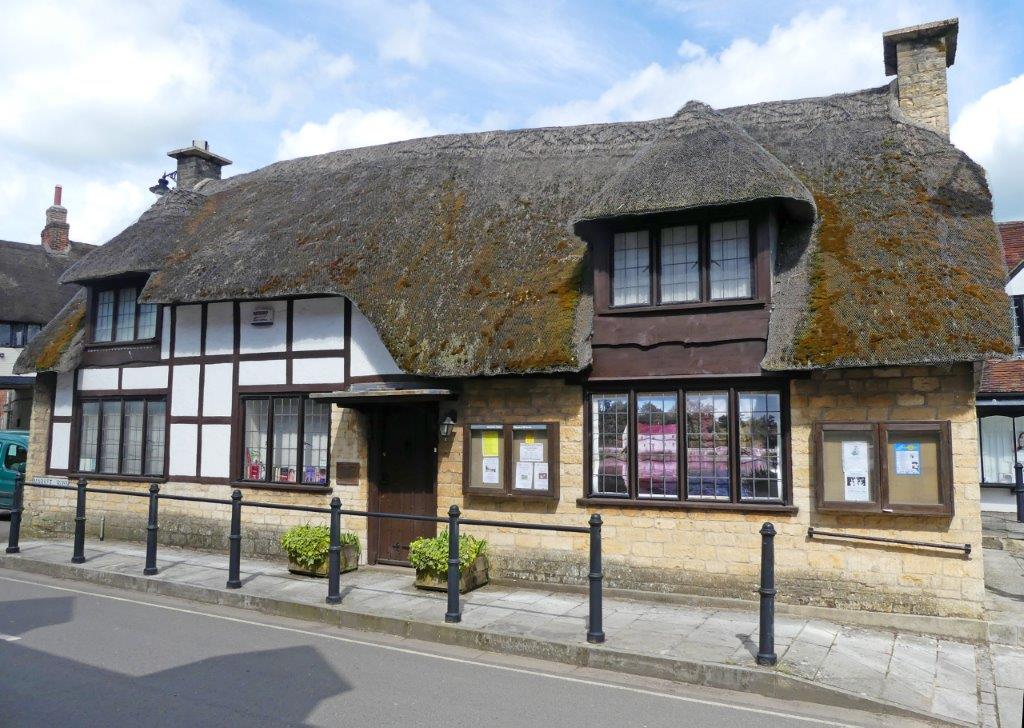 The museum is housed in an historic building of sixteenth-century origin. During the years this attractive thatched building has been a shop, solicitors` offices and the Town Council Office. Information about Thomas Hardy and his association with the town form part of the literary heritage displays.

Across the Market Place, just below the White Hart, is Ricketts Lane. Follow the lane into the recreation ground and continue straight ahead until you reach the River Stour. On your right you will see a pair of semi-detached Victorian red brick villas, one with a blue plaque commemorating Hardy’s stay in Sturminster.

Thomas Hardy and his wife Emma Gifford came to live in Riverside Villa in 1876 when they were in their mid-thirties. A friendship developed between Hardy and his landlord Robert Young who he regarded as ‘a storehouse of local anecdotes and traditions’.

The solid new Victorian House built on a bluff above the River Stour, with fine views of the river and surrounding countryside was described by Hardy as: ‘a pretty cottage’ and he later portrayed the idyll here as ‘our happiest time’.

Shortly after their arrival he recorded in his diary that they had rowed up the river in the setting sun, and gathered the meadowsweet and water lilies. He notes how they disturbed a flock of swallows from the bushes and how tall and thick the rushes grew at the water’s edge. The mowers at work in the meadows called out to them as they glided by.
At Riverside Hardy wrote The Return of the Native. He already had four novels to his credit: Desperate Remedies, Under the Greenwood Tree, A Pair of Blue Eyes and Far from the Madding Crowd. He looked back on his time here with affection in poems including: On Sturminster Footbridge, Overlooking the River Stour, The Musical Box and A Two Year Idyll. 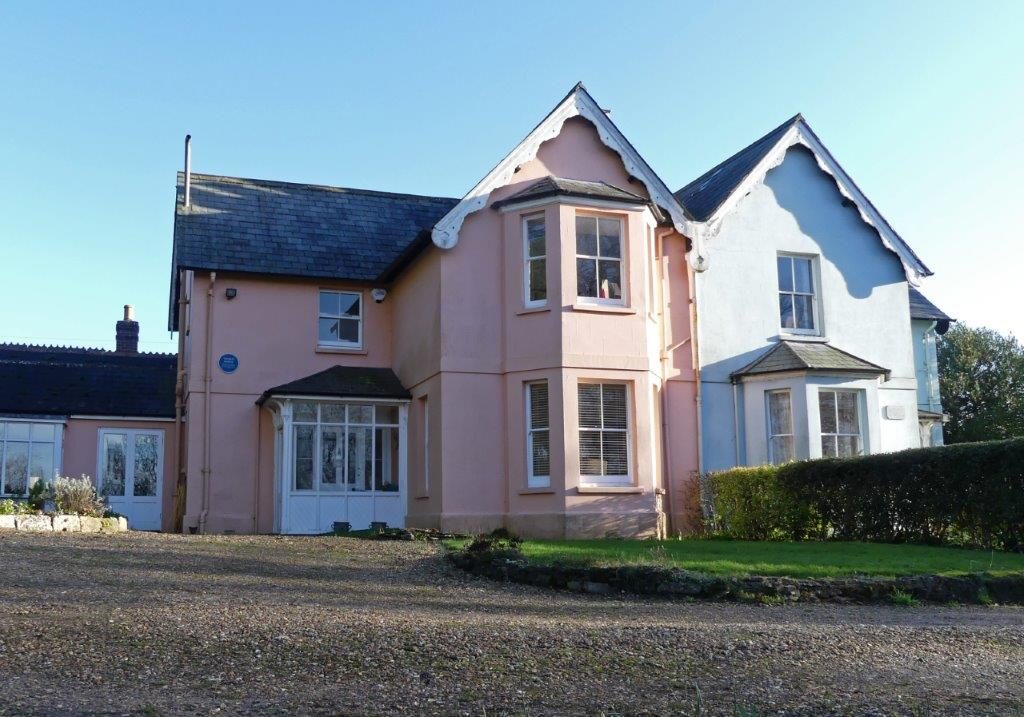 Walk past the front of the villas and take the path ahead down to the river bank. Continue along beside the river to arrive at Colber Footbridge.

Colber, from which the elegant white iron footbridge takes its name, refers to a deserted village which once occupied an eight acre site on the far side of the river. The present iron bridge was built in 1841 on the foundations of an earlier one. It is easy to imagine Thomas Hardy standing on Colber Bridge during periods of quiet contemplation by this peaceful open stretch of river.

On Sturminster Footbridge
Reticulations creep upon the slack stream’s face
When the wind skims irritably past,
The current clucks smartly into each hollow place
That years of flood have scrabbled in the pier’s sodden base;
The floating-lily leaves rot fast.
On a roof stand the swallows ranged in wistful waiting rows,
Till they arrow off and drop like stones
Among the eyot-withies at whose foot the river flows;
And beneath the roof is she who in the dark world shows
As a lattice-gleam when midnight moans. 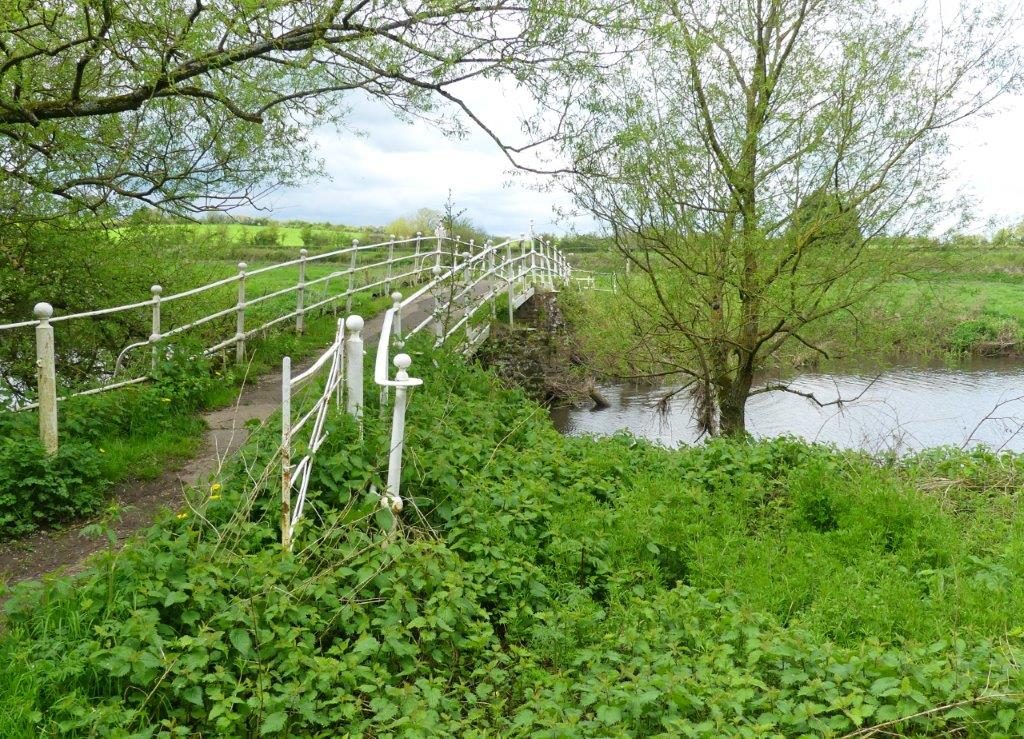 Cross over the bridge and follow the signposted footpath diagonally across the meadow to arrive at Stalbridge Lane. On reaching the lane turn left and walk up hill. 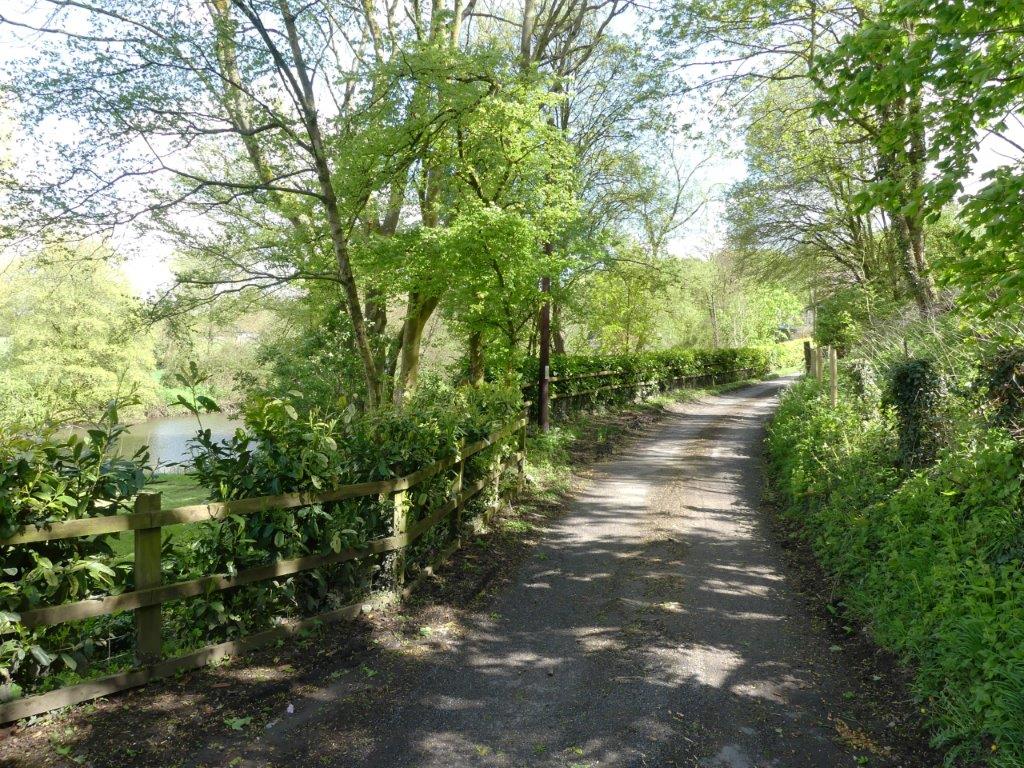 Stalbridge Lane would have been well known to Thomas Hardy who much enjoyed visiting country fairs and featuring them in his novels. He would have walked along Stalbridge Lane when he visited the ‘Toad Fair’ held at Bagber Bridge which spans the River Lodden. At this fair the notorious ‘Doctor’ John Buckland professed to be able to cure the King’s Evil (a form of scrofula) by tearing the leg off a living toad and placing it, still quivering in a little bag which was then hung around the patient’s neck to ‘turn their blood’.

Continue walking up the lane and just before reaching the main road turn left along a footpath to Sturminster Mill.

Although the majority of Sturminster Mill dates from the late seventeenth-century the Domesday Survey records four mills within Sturminster Manor of which this is probably one. From high ground above the mill there is a view of Thomas Hardy’s Riverside Villa and the Town Bridge; landmarks so familiar to him.

Emma Hardy died on 27 November 1912 aged 72 at Max Gate, the house she shared with Thomas near Dorchester. Although the couple had been estranged, Emma’s death was a great trauma for Hardy and is reflected in his poetry from that time.

In 1916, towards the end of his life, Hardy visited Sturminster Mill and wrote a poem The Second Visit, recalling the moment. He was with his second wife Florence and the poem is a dual memory; the woman on the bridge in the middle verse is Florence but Hardy’s memories of Emma from over forty years before dominate his final thoughts.
It is interesting to note that in 1907, between the time of Hardy’s residence in Sturminster and this re-visit, the traditional water wheel had been replaced by a water turbine but it is the Clack, clack, clack of the original wheel he remembers.

The Second Visit
Clack, clack, clack, went the mill-wheel as I came,
And she was on the bridge with the thin hand-rail,
And the miller at the door, and the ducks at mill-tail;
I come again years after, and all there seems the same.
And so indeed it is: the apple-tree’d old house,
And the deep mill-pond, and the wet wheel clacking,
And a woman on the bridge, and white ducks quacking,
And the miller at the door, powdered pale from boots to brows.
But it’s not the same miller whom long ago I knew,
Nor are they the same apples, nor the same drops that dash
Over the wet wheel, nor the ducks below that splash,
Nor the woman who to fond plaints replied, ‘You know I do!’ 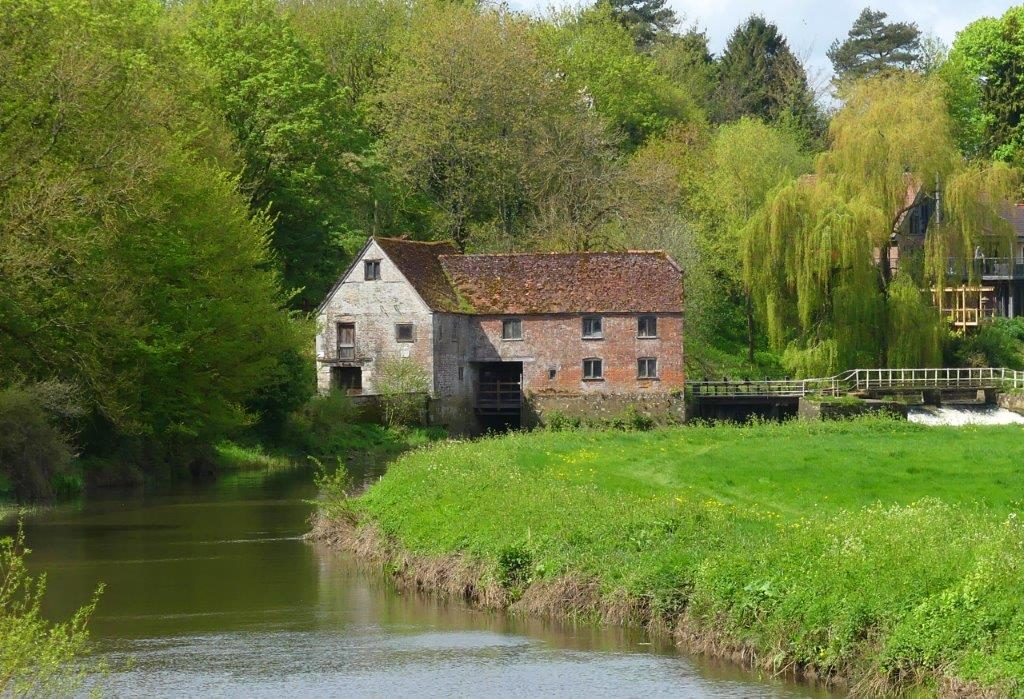 Exit the mill grounds into Newton and walk downhiil towards the Town Bridge.

The River Stour runs as a constant theme through the writings and memory of Hardy. He would have frequently crossed the Stour by The Town Bridge, one of the finest medieval bridges in Dorset. In Hardy’s imagination Tess journeyed wearily south across the bridge on her way to Casterbridge Market.

At the halfway point, mounted on the bridge parapet, is a notice threatening transportation to anyone damaging the structure. In The Mayor of Casterbridge Thomas Hardy explains the imperative for the transportation plaques. During the 1830s and 1840s hungry disenfranchised labourers would gather on the counties bridges and damage them by loosening the capstones and pitching them into the river. 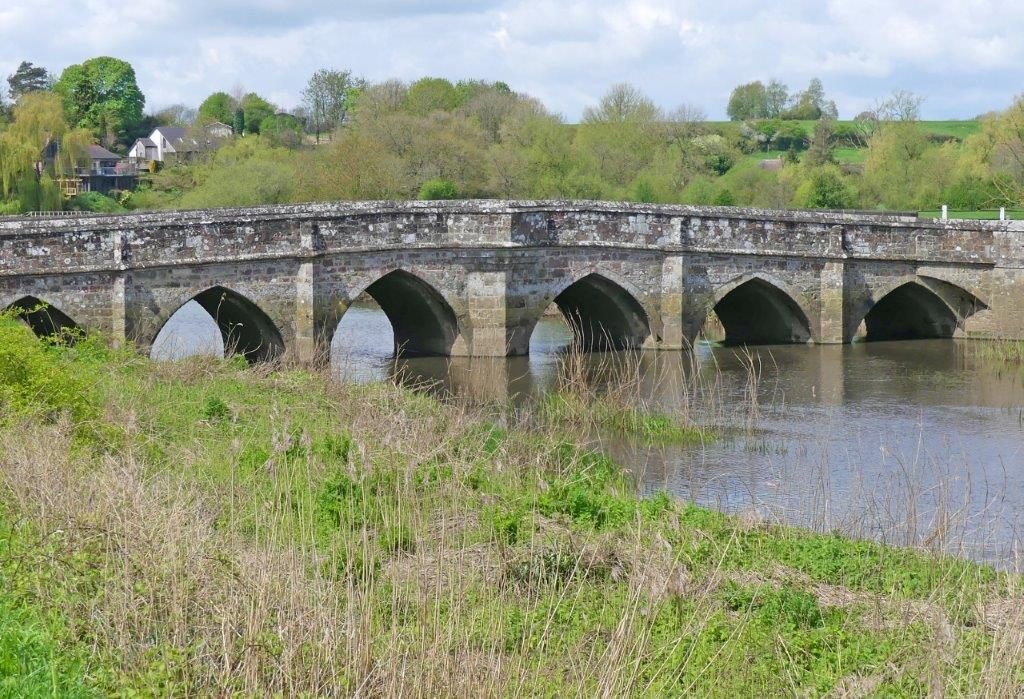 Walk up Bridge Street as far as the fish & chip shop and turn right into Church Lane. On reaching St Marys Church pass along the left hand side and immediately turn left into a footpath to arrive at Penny Street opposite Vine House. 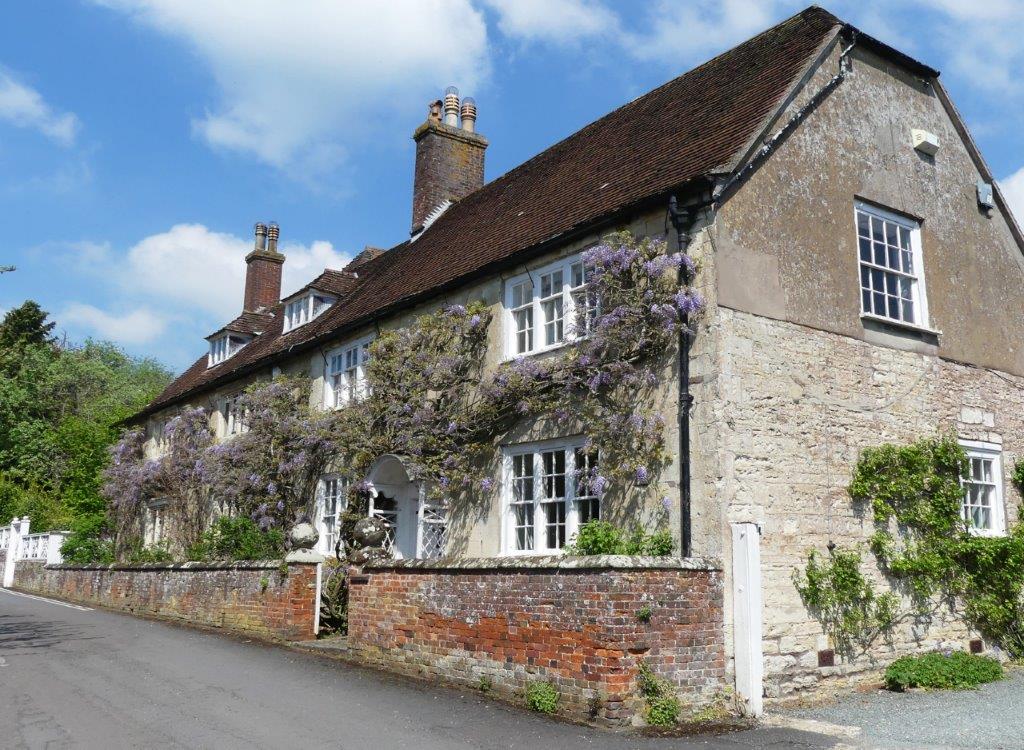 This impressive house was formerly the home and office of local solicitor and magistrate Thomas Dashwood. When the Hardys lived in Sturminster they became friends with solicitor Henry Charles Dashwood, Thomas’s grandson. They dined and took tea together on a regular basis. On their last evening in Stur, in March 1877, the Hardys: ‘slept at Mrs Dashwood’s, after breakfasting, lunching and dining there; and in the morning saw their goods off, and left Sturminster for London’.

Turn left up Penny Street to arrive back at the Market Place beside Holebrooks butchers and delicatessen. 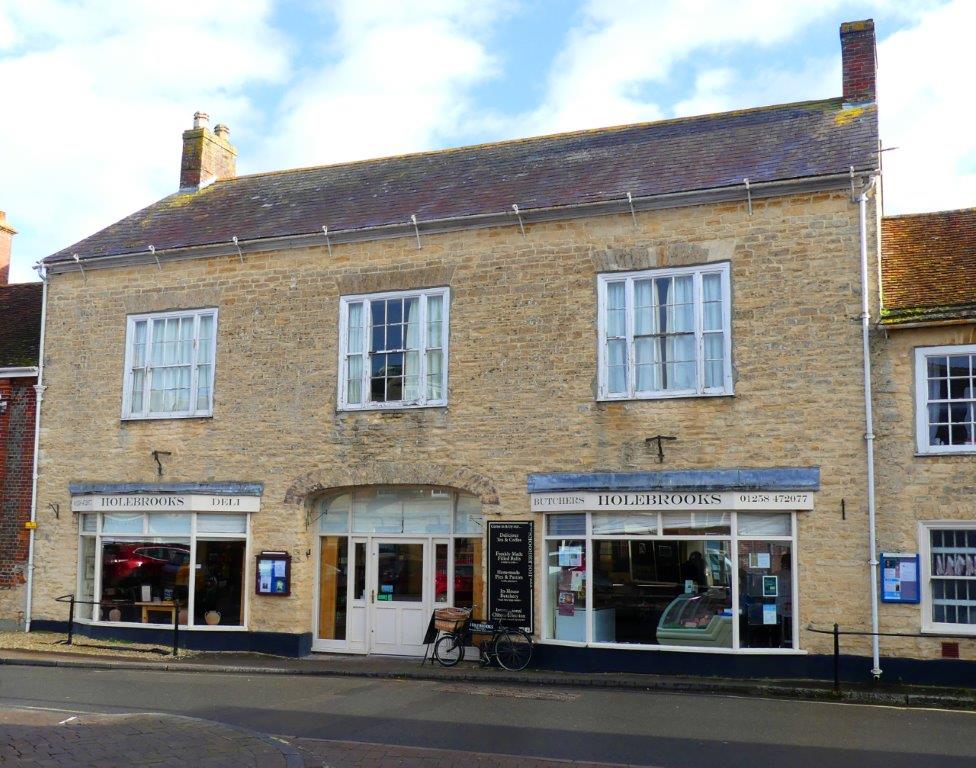 Thomas Hardy attended concerts in Sturminster most likely in the assembly room above the Crown Inn (now Holebrooks). He mentions one evening in particular where he was greatly impressed by the voice of a young woman who sang an old English song. He said: ‘She is the sweetest of singers’ and later wrote a poem addressed to her as:

The Maid of Keinton Mandeville
I hear that maiden still
Of Keinton Mandeville
Singing, in flights that played
As wind-wafts through us all,
Till they made our mood a thrall
To their aery rise and fall,
‘Should he upbraid.’
Rose-necked, in sky-gray gown,
From a stage in Stower Town
Did she sing, and singing smile
As she blent that dexterous voice
With the ditty of her choice,
And banished our annoys
Thereawhile.
One with such song had power
To wing the heaviest hour
Of him who housed with her.
Who did I never knew
When her spoused estate ondrew,
And her warble flung its woo
In his ear.
Ah, she’s a beldame now,
Time-trenched on cheek and brow,
Whom I once heard as a maid
From Keinton Mandeville
Of matchless scope and skill
Sing, with smile and swell and trill,
‘Should he upbraid!’

SO what has the Community Chest done for us?

Councillor Pauline Batstone reflects on the Council’s workings in pandemic

Voice of the Church March 2021

It’s been a long, hard year for us all.  The churches have struggled as much as any organisation to keep up