The Top 7 things to see or do in Sturminster Newton 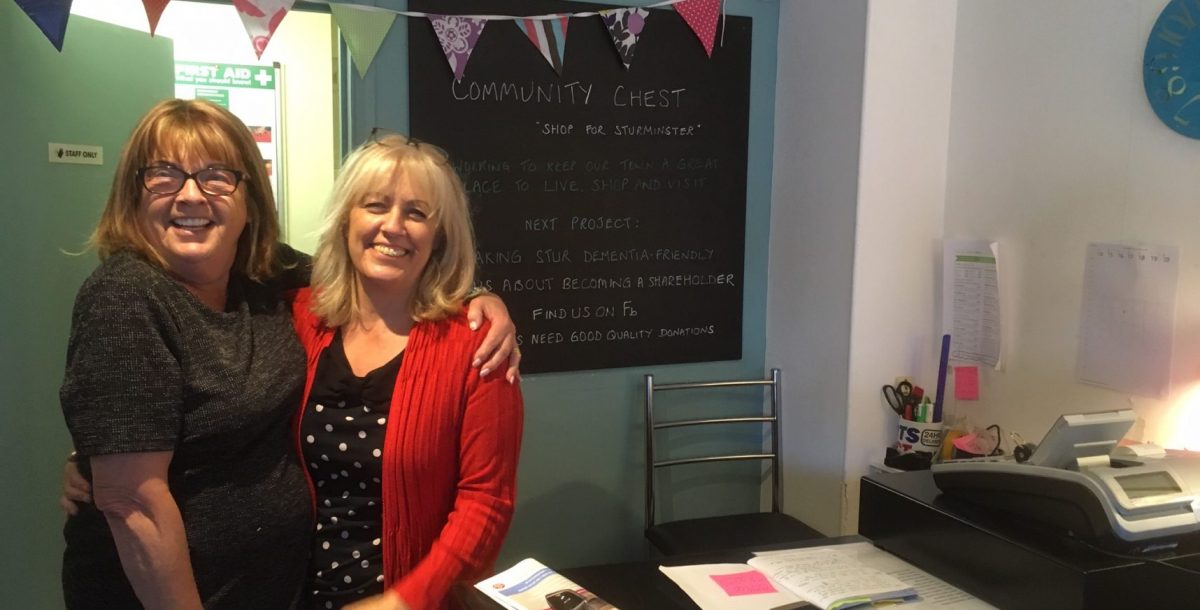 One of our readers has posted this blog about their favourite things to visit,  to see or do in and around Sturminster. He says they are in no particular order.

Do you agree with these choices? Why not post your own list of favourite places, walks, attractions in North Dorset towns or villages?

The Stour Valley Walk from Sturminster to Bagber via Cutts Mill and back. 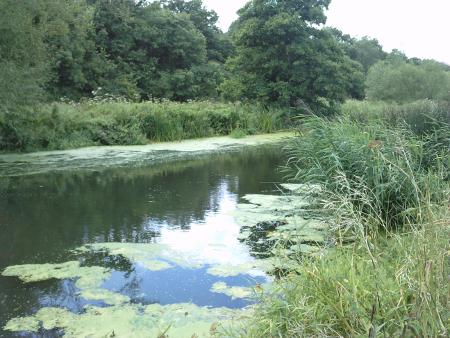 This beautiful walk circular route takes you to Cutts Mill on the Stour and then through a corner of Bagber and back into town past the Hardy Oak and Colmer Bridge. In all it is some 7 kilometres in length. Take a snack and try to while some time away along the banks of the Stour. In wet weather or after rain take walking boots as the underfoot can get very wet.

The walk starts at the corner of the town recreation ground. You reach the start via Ricketts Lane off Bridge Street just down from the Town Museum. An incidental bonus is that the walk will take you past Hardy’s residence, Rivendell.

On reaching the Stour turn right along the numerous pathways available. Don’t worry, they all join up. Make your way through the copse that borders the river at this point. If you have time seek out the short byways that take you to differing parts of the river bank, most of them leading to anglers’ positions for the fishing that takes place on the river.

The main path leaves the copse after 1 or so kilometres, by which time you may have walked the council maintained boardwalk keeping you and yours dry whilst your dogs plunge into the marshy (very marshy) terrain underneath. The path is clear and easy to follow. It progresses along the hillside opposite the Bath Road though so far away you rarely hear or see the traffic, before finally settling onto the river bank. The Stour is a real gem. Slow flowing and meandering, a romantic idyll if ever there was one until troubled by rains that gather the entire waterfall from North Dorset rivers and tributaries and bring them to Sturminster via this innocent looking waterway. Birdspotters, anglers, poets alike will find it an inspiring scene. Continue along this footpath, past the famous Horse rides of the Fox-Pitt equestrian team and make your way to Cutts Mill. One of seven mills lining the river’s banks in the early Victorian period, as its name suggests it was primarily a saw mill. Now in a poor state of repair after vandalism caused it to be sealed off from public access it’s pool and gear workings lay on a beautiful setting creating industrial theatre much loved of romantic novelists like Hardy and Barnes. I presume the reality was of harsh conditions and poor lives.

From Cutts Mill take the footpath close by the Mill (you are almost turning back on yourself) and over one of the footpaths signed for Bagber, the birthplace of Sturminster poet, William Barnes. Here be typical slight uphill footpath walking through arable fields, hedged, grazed, tree’d and often subject to flood. Arriving at the tarmac lanes of Bagber take a right and follow the lane as it turns left through the hamlet. Walk a few hundred yards and come to Stalbridge Lane. This ancient partly metalled track soon gives way to a bridle play then a muddy footpath. The lane is bordered by drovers hedges and passes by Barnes’ Oak an unmistakable old beast that dominates the track. Continue down the lane over the Devilish – a brackish pool under the footbridge and onto the famous wrought iron Colmers Bridge. 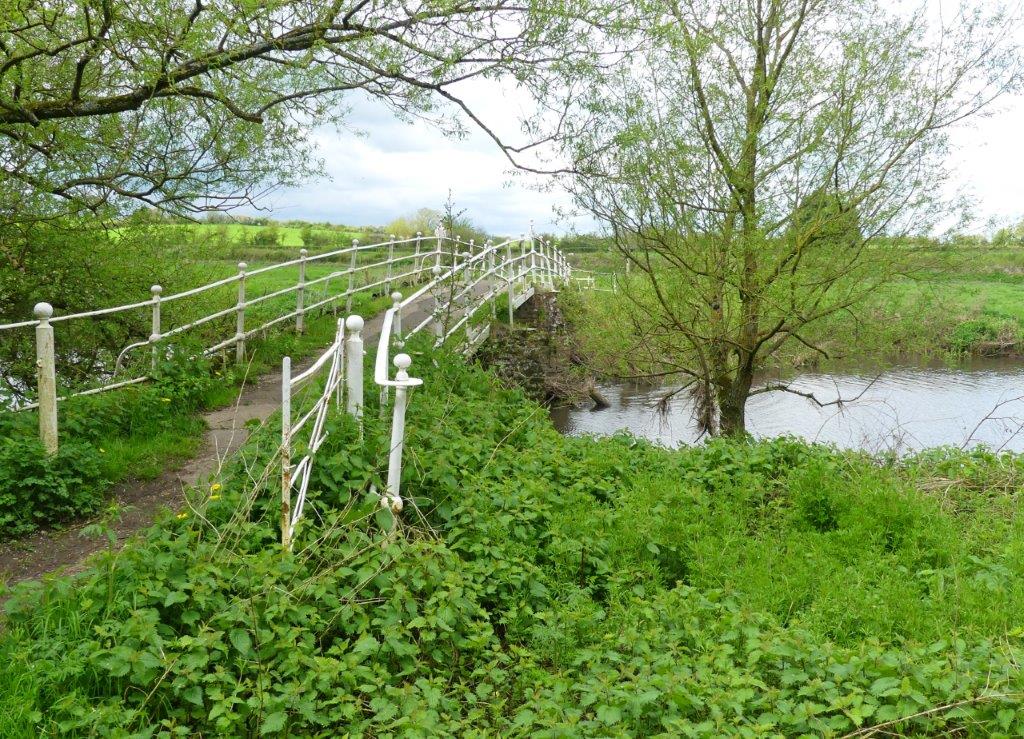 After that simply follow the path back to Hardy’s house and Sturminster Newton. 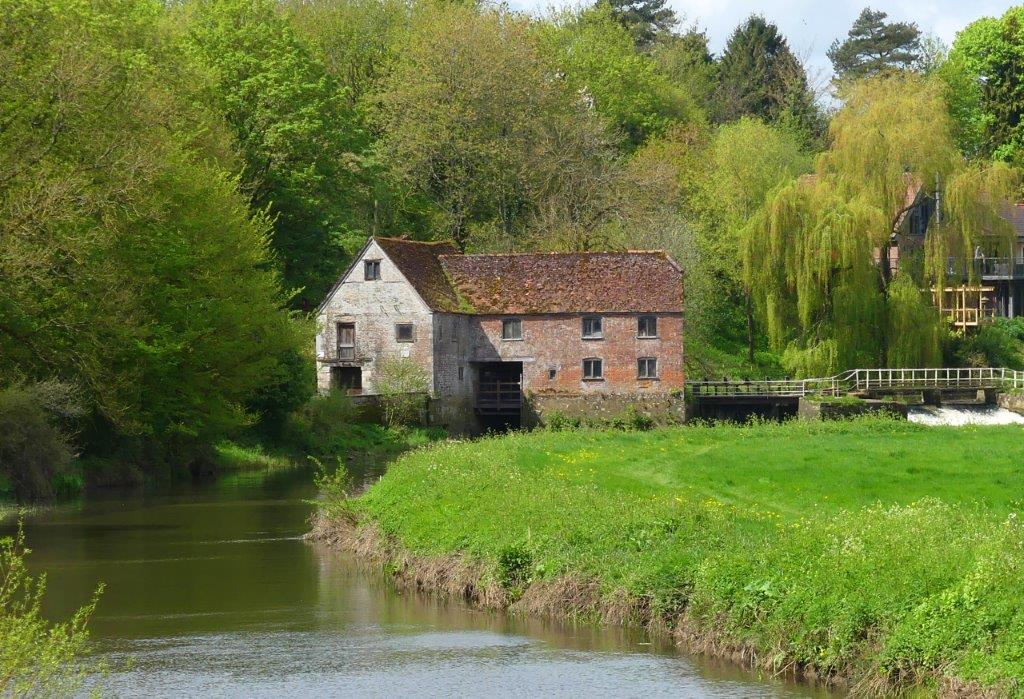 Is an ancient flour mill whose presence is actually recorded in the Domesday book of 1086. Today it is locally owned by a charity that continues to maintain it and famously produce flour for public sale. Stood over the Stour at the southern edge of the Town it’s stern exterior lights up on sunny days to remind you of the value and pleasure it brings to the town and its occupants and visitors.

The present buildings are an amalgam of different endeavours. The South Wing was rebuilt in 1650 as a flour mill and the North wing, originally involved in cloth fulling was demolished and rebuilt in the 1850’s to extend the flour mill capabilities.

Today you can find a fully working mill with a souvenir shop selling its own flour amongst other souvenirs. You can take a guided tour through the workings and see it in action.

There is ample free parking and you are never more than half a mile from a local hostelry too! 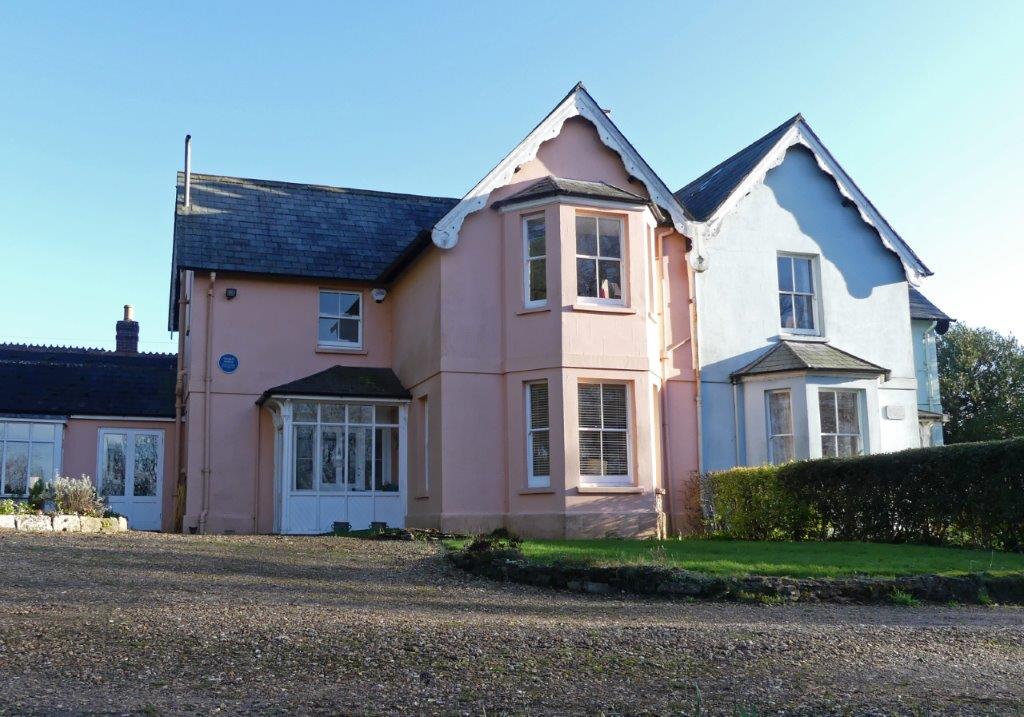 Thomas Hardy spent too of the self-described happiest years of his life living at Riverside Villas in Sturminster Newton. He lived there with Emma Gifford, his wife and wrote Return of the Native, his fifth novel. And he used the town and its setting for many of his other novels, notably scenes with Tess and Angel Clare from Tess of the D’Urbevilles.

The solid Victorian house was built by his landlord, Robert Young with whom he became firm friends.

You can find the residence by going down Ricketts Lane taking the continuing footpath until you reach the Stour. Turning Right and looking back toward the village the house is an imposing Victorian semi, currently painted a fashionable off-pink. 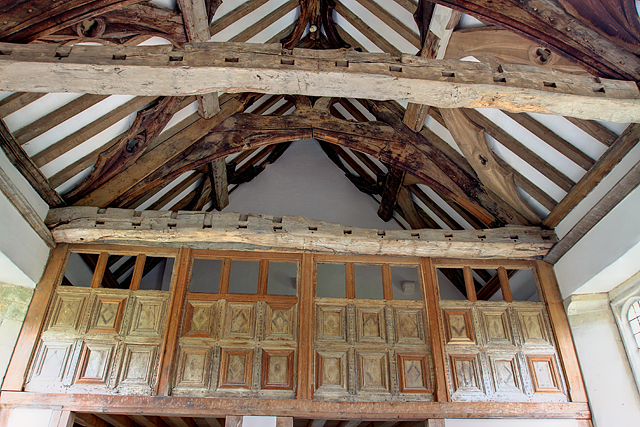 The Manor house is the principal part of a small stone manor house built for William Latimer, then Sherriff of Somerset in and around 1370. It remains largely untouched apart from renovation to make the site one of unique historical record and interest.
The manor and associated Mill can be found at Fiddleford, Sturminster Newton, Dorset, DT10 2 BX. It can also be reached by taking the Trailway from the Station Road car park and at the major iron footbridge over the Stour following the signed footpath to Fiddleford Mill.

The house is set in its own grounds largely untouched by the passage of time with the River Stour alongside as well as an attached slightly younger and inhabited residence.

The Manor is managed by English Heritage. There is ample parking and good guides to the Manor’s ancient history. There is no charge for entry. The site is unmanned but provides great access to the house in its entirety. If you visit the English Heritage site www.english-heritage.org.uk and navigate by search to the Mill you can find opening times etc.

As well as the site for the Manor house here you can discover the remains of Fiddleford Mill. 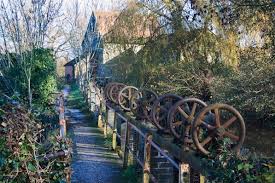 Most of them 18th century with later Victorian additions. Though there is a nameplate dated 1566 too. A little dangerous for children there is a deep slow moving pool together with a stepped weir and old sluice and dam workings, together a fascinating insight into the Mills on the Stour. As well as its industrial relevance you will also be in one of Dorset’s natural wildlife hotspots. If you are lucky you may see the cobalt blue flash of a kingfisher or the pure white of the little egret. Stay long enough and you are sure to spot a fishing heron lurking in stiller waters away from the weir.

The museum is housed in a typical thatched render and stone cottage near the southern end of the towns retail centre. The museum aims to preserve the heritage of the Town and its surrounding villages collecting and conserving objects, publications and photographs relating to the Town’s history. It has an important archival record including photographs of the once thriving cattle and dairy markets and railway workings, all no longer present.
It also has a good collection of artefacts relating to Robert young a Dorset poet and friend of Hardy and Barnes.

You can get info regarding the site at www.sturminsternewton-museum.co.uk 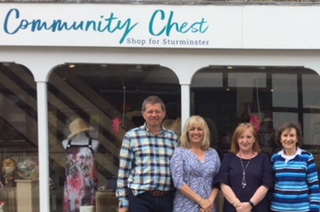 Fast becoming the most famous charity shop in Dorset, the Community Chest is set up as a boutique shop selling, recycling, repurposing other people’s clothes and bric a brac on behalf of the community.

This incredible entertainment, retail and education resource sits right in the heart of the Town by the Railway Park and the Station Road Car Park. Literally set up by the community after frantic fundraising to replace the loss of the cattle market with a legacy building that serves its community.

It has a full professional theatre with stage, lighting and retractable stage seating for over 300. In addition there are performance and workshop rooms, a fully equipped kitchen and a full time café. What’s more the community focus and spirit are there for all to see. Manned principally by volunteers this resource has at its heart the aim of serving the community in which it exists.

It has ample free parking for performances and incidental visits. It is currently running a full programme of top star line ups that attract visitors from some distance. It is simply our top draw for out of town visitors. VYou can find its current programme of events on this web site but why not visit www.stur-exchange.co.uk for more information.

A statement from the UK Boogie Woogie Festival. It is with very heavy keys, slow blues and worn out dampers that,

Support for people self isolating and vulnerable who would like help with their shopping, prescription drug deliveries and so on

COVID 19 ACTION GROUP STURMINSTER NEWTON Led by Carole Jones, a band of residents has set up a group to help local

Love. A blog from John Alen