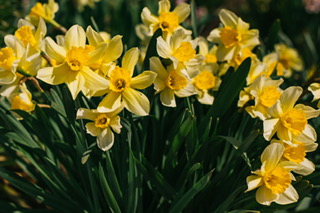 Musings of a Country Lawyer – both A-musing and B-musing!

Jennie Vaughan Jackson of Porter Dodson reflects on her working with the farming community. If you would like to send us a similar blog we would be delighted.

I have done my share of commuting in the past. At this time of year it is fantastic to be driving down to Sturminster Newton, especially when we have a heat wave in February! The daffodils in the gardens and all the anticipation of spring are wonderful. Even though I know it’s caused by the wrong global reasons and that it’s upsetting the natural balance of bird, beast and insect, it still beats jolting around in a Tube Train looking at the impoverished attempts of the wannabee Banksys along the concrete embankments.

It brings out the tractors too. Now that is a thing… My friends who used to beagle many years ago tell me that a hare when hunted normally runs in rings covering quite a few miles but always going round in circles. However, a jack hare when surprised out of his area will do a straight run for home, called a ‘point’. That can mean a long trek of 5 miles or more, and tractors I find are just the same!

Sometimes, when they turn out of a gate in front of you they turn into another gate after a hundred yards or so. Every now and then you are stuck behind their amazing trailers for mile after mile with your eye half on the dashboard clock hoping your client will forgive you if you are five minutes late and with a splash of something very brown over the bonnet!

My farming clients are not unduly fazed by brown stuff but they do get cross when their deeds are not right. I had a case last week where a client found that no less than two houses that should have been on her deeds were missing!

She had taken advantage of the offer by the Land Registry many years ago to do first registration of her farm title directly themselves. They did a ‘charm offensive’ back in the early 2000s through the NFU and direct at local talks in village halls encouraging registration. It would be a quick service they said and much cheaper without the complication of her using a solicitor!

They sent round a friendly Land Registry officer who collected the old deeds and went away with them. In due course, they sent her a copy of the computerised register and a plan the size of a table top. The deeds, of course, did not come back and, sad though I am to say it, those deeds will have gone into the shredder and are no more.

A few weeks ago, apropos of something else, my client went looking for her title to the two houses that adjoin her farmland. Not finding the large plan, she went to the Land Registry to see what title number her houses had. Imagine her surprise when she found they had no record of them at all. So she ended up with me as her lawyer after all to try and unscramble what had gone on.

She had kept some copy documents, thankfully, and from those, I was able to see that the houses were on the original title her family had purchased at auction in the 1970s. I was able to go on to the Land Registry map for free and confirm that the area was unregistered and that the adjoining field was registered to her. Armed with her story of what had happened I wrote to the Land Registry to ask them to explain, citing the history and timings. This week I had a letter back from them – it contained a brief apology and an updated title to include the houses!

Unregistered title is now not even taught in Law College and the Land Registry today is a very different place from the institution that sent round friendly land registrars to do your registrations.   We have a constant requirement to work with first registration of land and properties as none of the more inexpensive conveyancing firms will look at it and the number of lawyers who know what they are looking at with it is dwindling.

I always joke that when we send a contract and unregistered title to a London firm of solicitors I can hear the screams from here! More seriously they will not consider proceeding until we have gone through the registration process at the Land Registry, which we have to do on a ‘fast track’ basis armed with the Estate Agents’ memorandum of sale. Fast track can take one to three months to achieve – slow track it can be six months or more.

If we are working with local firms we know, then often we can sell unregistered land without a problem. However, if you think you bought your property before 1991 and there is a chance your title is unregistered, and especially if you are considering selling, do come and talk to us – we might save you some delay and stress.