Jacqui Wragg has put together this amazing history of the early years of the Swan Inn / Hotel. Marvel at where this information is gleaned (Jacqui has her sources) and be surprised at what a violent drunken lot older Sturminster residents were. So you see it’s not just the youth of today! 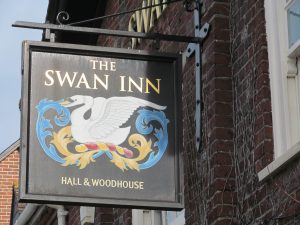 The Swan Inn.  The early landlords and possible descendants still in Stur today.

The approach up through Bridge Street from the ancient 6 arch bridge leads you to the open area of the medieval market place.  The striking brick building to the right is the Swan Inn, built following the fire of 1729 which devastated the central market place area. Little is recorded of this fire, unlike that which took hold of nearby Blandford Forum in 1731.

This early Georgian Inn with its eight bays, Doric pilasters enriched with Tudor roses in moulded brickwork and sashed windows is no longer leased from the Pitt Rivers family, the original landlords for over 200 years, but now belongs to Hall & Woodhouse.

The current hosts are Chris and Theresa Meaker.  For more information about the facilities, food, drink and events visit this link  https://sturminster-newton.org.uk/listing/the-swan-inn-2/

Landlords and their troublesome customers 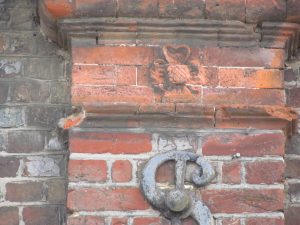 Matthew Rowland is the first known landlord of the Swan. He died without a will in 1743 and the surviving detailed inventory list of contents includes beds, tables and chairs in each of the ‘chambers’ over the stables, passage, cellar and parlour.  It tells us the ‘Great Cellar’, contained beer and pipes, whilst the ‘Little Cellar’, beer and barrels and the ‘Cyder and Brandy’ was kept ‘under the Stairs’. The kitchen contained 4 table boards, 3 Settles, 3 Stools, Clock and Six Chairs. Also, ‘Pots, Skillets, Pewter, Mugs and Glasses’.  The ‘Little Parlour contained, 8 Chairs, 2 Tableboards, Cupboard, firepan and tongs’.   Following Matthew’s death his widow, Susannah, held an alehouse licence in 1747 and 1753 and their son, John Rowland in 1758.

John Baynard (or Banyard) held the licence in 1761 and 1769 and his surviving will of 1775 provides for his son in law William Colbourne following the death of his beloved wife, Mary.

The Colbourne family were prominent members of Sturminster Newton with connections in producing swanskin, a cloth used by the Newfoundland fishermen click here for an article on Swanskin in Dorset Life click here for more information. Following the decline of that industry, the Colbournes’ turned to banking and the fishing industry.  Part of the family moved to Twillingate taking other Sturminster men with them and their descendants remain there today.

Joseph Walters is listed in The Universal British Directory of Trade, Commerce, and Manufacture which was published around 1796 which states ‘Swan Inn and Plumber and Glazier and Auctioneer’. 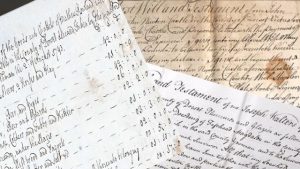 His will dated 4th April 1802 refers to living in a ‘dwelling house known by Swan Inn’ and reveals a business partnership with his son, also called Joseph. We don’t know how successful the partnership was but, in 1806, Joseph, the younger, still living at the Swan is declared bankrupt.  He professes to being a ‘grazier, jobber, auctioneer, plumber and glazier, dealer and chapman’.

The family names, Rowland and Walters, still survive in Sturminster Newton today and rather interestingly, the following reports of fighting and drunkenness at the Swan by men at that time, share the same names of men known by many within the Sturminster Newton community of today.

In April 1882, John Cowley, (any relation?) a dealer of Sturminster Newton, was charged with assaulting and beating Robert Rideout.  They were members of the same bagatelle team and a disagreement occurred over payment for beer which caused John Cowley to strike Robert Rideout with a blow to the side of the head and then threatened “to pull out his_____ nose”.  He then took him by the nose and for that he was fined 9s 6d.

Attacks on noses were common place, it would seem.  In May 1879, John Harris, the landlord of the Swan Hotel at that time, was charged with assaulting 70 year old John Fish. He “took hold of his nose, twisted it, and pushed him out of the door’.  For that he was fined £1 and 9s costs.  Adding insult to injury John Harris then remained before the five J.P.’s to be charged for permitting drunkenness and fined a further £2 and 8s costs and the conviction ordered to be on his license.  An expensive day all in all for poor Mr Harris.  The offending drunk, James Strange, received a lighter fine of 5s and 13s costs.

To complete this short history, we return again to the name of Rowland in connection with the Swan Inn.  Two brothers, Matthew and Matthias, were charged with being disorderly on 24 June 1885 when refusing to leave following a request from Thomas Beer, the then landlord.  The brothers pleaded guilty, and reasoned that as Matthias had been in British Colombia for over 20 years they were ‘elated on meeting after so long a separation and certainly took too much drink’.  It would appear that neither the police superintendent nor the landlord wanted to press the case, however, the bench felt differently as Matthew had been convicted twice before and they fined the pair of them.

Jacqui Wragg has put together this amazing history of the early years of the Swan Inn / Hotel. Marvel at where

A day in the life of “Agnes and Vera”

A timely reminder on fire safety at Christmas