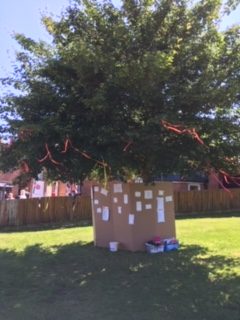 Sturminster’s POET Tree was a big hit at the Festival. 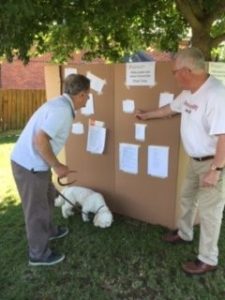 The Poet Tree became a place to share words. Invited to post poems that had special meaning, people of all ages contributed their favourite rhymes, poems, lyrics and some prose too.  There were some snippets from well-known poems, several original compositions, a few wise quotations, and even some profound thoughts on substituting reason for fallacy.  Unsurprisingly given the drizzly weather in the morning, Dr Foster and Incy Wincey spider were pinned up early on! It didn’t take long for other writings to join them and by the end of the day all life was there and all emotions stirred. Those who read the postings commented on the assortment ranging from comical through to broken hearted.

One original creation that ably captured the theme of Sturminster Newton’s first Literary Festival went like this:

He wrote a crackin’ book

about the Mayor of Casterbridge –

It’s really worth a look.

Jacqui Wragg lights upon the convoluted history of ownership and occupation of Dovers off Church Street in the town, on the

Don’t have a motorcycle license? Motorbikes are the ideal form of transport

We have written this useful guide for anyone who is looking to get a motorcycle, but this shouldn’t stop experienced local